1. Price to Match the Rightmove Thresholds.
One of the most significant changes brought about by the dominance of property portals in house hunting is that most buyers now choose to filter their searches using their minimum and maximum budgets.

Whilst most buyers will search one or two thresholds above their budget, logic suggests that there are more buyers available at lower thresholds than at higher ones. As such thresholds need to be considered when setting an asking price.

For example, a property priced at £540,000 would return in at least the same number of search results if it was priced at the next threshold at £550,000. Aside from the fact that it then has a chance of netting an extra £10,000 there are two additional marketing advantages. Firstly, it would appear in the search results for buyers who are looking from £550,000 upwards, and secondly it would be more likely to appear on the first page of any search results.

The threshold principal also has applications in reverse. Rather than asking £555,000 for a property it makes sense to reduce its asking price to £550,000 (or perhaps Offers Above £550,000) to increase exposure.


3. Consider Smaller, Incremental Price Reductions.
Predicting the value of a property is not an exact science and price reductions are an unfortunate but common feature of house selling.

At Bloomfield Grey 45% of the properties we sold in 2018 required at least one price reduction before a buyer was found, with the average drop being around 6% of the initial asking price. Many agents would be hesitant to publish figures such as these but we take the view that having a balanced number of price reductions is evidence that we are being suitably ambitious with our asking prices to begin with. Or to put it another way, any agent who has never reduced an asking price is probably being too conservative.

Deciding the frequency and size of price reductions is a nuanced decision that varies from property to property, but generally we encourage our clients to experiment with a number of smaller reductions rather than one larger one.

This advice firstly reflects the highly price sensitive nature of the modern housing market, where buyers enjoy almost perfect market conditions and where small changes in an asking price can produce surprisingly positive results. Secondly this advice is designed to take advantage of a feature on Rightmove that causes a property to be re-emailed to active buyers if its price drops by at least 2%. These emails produce a significant spike in online viewings as shown in the graph below. 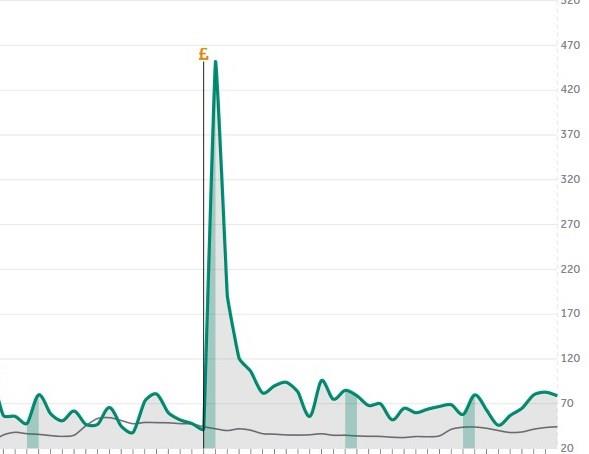 So for example, if a property requiring a reduction has an asking price of £680,000 then many would consider £650,000 as the next obvious asking price. Whilst there is some sense in this approach because at £650,000 the property would access a new threshold audience, a smarter precursor would be to reduce by just 2% (or £13,600) to create a spike in online viewings like the one shown above. If this initial reduction does not improve activity then a second drop to £650,000 (or 2.4%) can follow afterwards. This will produce a second spike in online viewings and will access the buyers in the market searching up to £650,000.

The point of staged reductions like those described above is to avoid dropping too far, too soon. We have had occasions recently where a drop of just 2% has produced sale a price ABOVE what would have been the next (seemingly logical) reduced asking price; thus making it a profitable tactic.